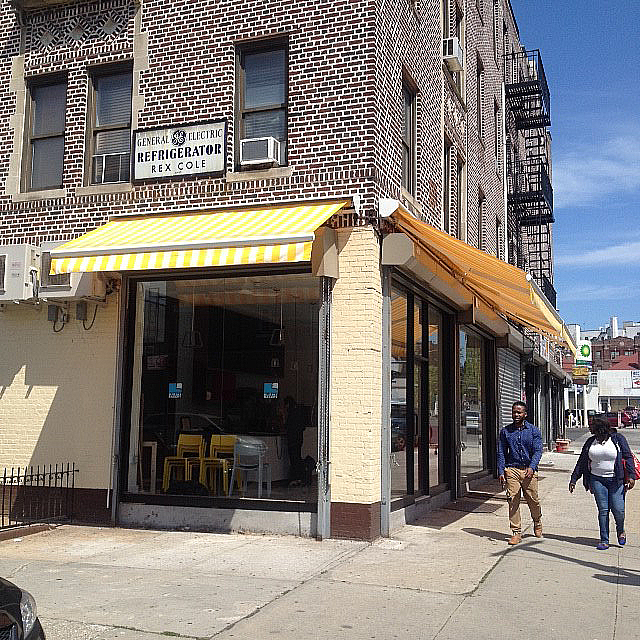 In 2001, Erik Goetze started Blue Sky Bakery as a retail coffee shop in New York City’s Park Slope neighborhood of Brooklyn, 10 years before gentrification set in from Barclay’s Concert and Sports Arena three blocks away.  Good coffee and a bright, friendly ambiance brought his customers in the door. But the daily-fresh baked goods like muffins, croissants and scones are the real highlight, especially first thing in the morning when the aroma draws the commuting work crowd.

Mt. Goetze began selling his baked goods to a wholesale market in 2003. Goetze was approached by another start-up entrepreneur who owned two locations of Jack’s Stir Brew coffee in Manhattan and wanted to buy his muffins.  Word of mouth about Blue Sky Bakery’s muffins spread.  Today, Blue Sky services over 37 wholesale accounts.

Mr. Goetze met with NDC GAF when he was ready to expand Blue Sky Bakery and make his muffins available to a wider audience.  He identified and executed a lease for a 1,000SF space in Brooklyn’s Prospect-Lefferts Gardens neighborhood. At the time of expansion Erik said, “Many people are asking us to come to their neighborhood. There is quite a demand.  And I have had to ‘waitlist’ wholesale accounts, that wouldn’t take ‘no’ for an answer.”

This new space features a food prep and baking space, double the size of its current location.  It has capacity for at least 50 new wholesale accounts, which should be achieved by 2017.  According to economic data provided by the NYC EDC, there are approx. 1,700 formal coffee shops (not including delis and bodegas) in NYC that Blue Sky Bakery could provide wholesale service to. Erik believes that attaining and maintaining these accounts, as well as serving 200 customers per day in his retail location, is realistic.

GAF closed its loan of $270,000 to fund build-out and equipment purchases for the new location.  The borrower pays principal and interest at a variable rate of WSJ prime +1% (Today 4.50%).  The repayment term is 10 years.

We are proud to help this small business with its expansion!  If in New York City, enjoy some Blue Sky muffins!