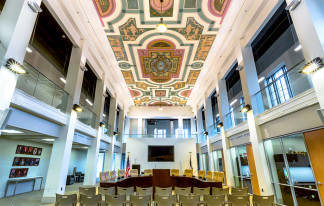 The First National Bank of Port Arthur was founded in the earliest years of the city’s existence and its growth paralleled that of the city. The current building dates from 1930. It was here that the bank was an economic anchor for Port Arthur during the depression and World War II, a period of time in which Port Arthur’s petrochemical industry was vital to the country’s war efforts. It also supported a booming post-war economy. The restoration of the historic Building launched a revitalization effort by the City of Port Arthur to stabilize its downtown and demonstrate to their citizen’s that the City is committed to preserving Port Arthur’s downtown and is committed to its economy and history.

The First National Bank of Port Arthur is located near the center of Port Arthur’s historic business district on Procter Street. Once a thriving commercial corridor lined with businesses, Procter Street has suffered from disuse since the 1970s. Many of the buildings had already deteriorated due to abandonment and then were heavily damaged by Hurricanes Rita and Ike in 2008. Some have been demolished and many stand in need of great repair. There are entire blocks or half blocks along Procter that are now vacant lots. The First National Bank Building is the only building remaining on either side of Procter Street. 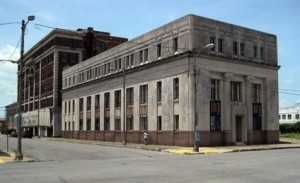 NDC has been an active partner in Port Arthur since 2005 by providing technical assistance and working with the City to help rejuvenate the city’s economy. NDC in partnership with PAEDC used New Markets Tax Credits to help finance the redesign the 19,500 square foot, three-story building as a modern office space. NDC’s $5.5 million Qualified Equity Investment in the $5.5 million project was combined with financing from Chase Bank, resulting in the creation and retention totaling 30 construction jobs and 20 permanent jobs.