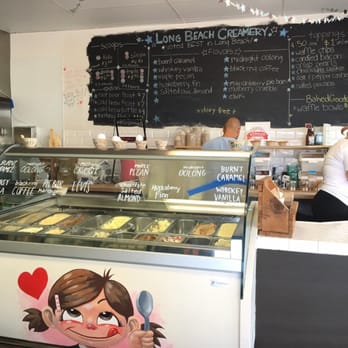 When Long Beach Creamery (LBC) needed to expand its production capacities and open a second location in Downtown Long Beach, California, it turned to GAF for help.

After attending a birthday party for the son of a friend and tasting a homemade peanut ice cream in June 2013, Ms. Dina Amadril became obsessed with the frozen treat. She spent the next two years creating her own recipes and testing her product in the Long Beach market.  In May 2015, Dina opened Long Beach Creamery at 4141 Long Beach Blvd.  Utilizing personal resources from selling her condo, a Kickstarter campaign and a HELOC on her home, Ms. Amadril built out and opened her 1,100 SF ice cream shop in North Long Beach.  The company quickly grew to employ 12 part time employees and is open Tuesday through Sunday from 12 noon to 10pm.  Each employee has a part in the ice cream making process. They serve about 8,000 ice cream lovers a month. LBC ice cream is made with local, organic ingredients. It is an artisan product with a corresponding price tag.

As sales continued to grow, LBC needed additional capacity in the production kitchen.  GAF assisted by funding an expanded kitchen and providing monies for the opening a second location in downtown Long Beach in a heavy foot traffic area.

“Since my business is still young, I doubted our ability to secure financing for a second ice cream shop buildout without paying ridiculous interest rates. GAF surprised the heck out of me; starting with diving into my business and understanding the second locations growth potential, full financing for the build out and an interest rate that keeps me competitive. The loan process could have been intimidating – but the GAF team kept the focus on what is needed now and before I knew it – the process was complete!”