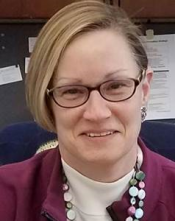 Ms. Overmeyer is responsible for overseeing the implementation of EPA’s regulations governing required standards and practices for conducting environmental site assessments or “All Appropriate Inquiries,” under the Comprehensive Environmental Response, Compensation, and Liability Act (CERCLA). She coordinated the development of the regulation that establishes standards and practices for conducting all appropriate inquiries and served as EPA’s Designated Federal Official for the Agency’s Federal Advisory Committee that was tasked with developing the proposed regulation on all appropriate inquiries. Prior to her tenure with OBLR, Ms. Overmeyer worked in U.S. EPA’s Hazardous Waste Identification division where she was responsible for the development of regulations under the Resource Conservation and Recovery Act.

Ms. Overmeyer earned her M.S. from Carnegie-Mellon’s School of Urban and Public Affairs and has a B.A. in economics from Indiana University of Pennsylvania.